The Canadian Economy: Fiscal Responsibility Pays Dividends For Canada And The U.S.

I will say a few words about the Canadian economy, the budget and the global economic situation, with which there are significant concerns. Let me start by recognizing the importance of the relationship between the U.S. and Canada. We have a $250 billion direct investment in each other's countries, which results in annual bilateral trade of more than half a trillion dollars - creating and sustaining millions of needed Canadian jobs.

We are a stable democracy, with a majority government and commitment to the rule of law. Canada is the single largest export market for 34 U.S. states and the largest and most secure supplier of oil, natural gas and electricity to the U.S. I'm always pleased when Americans like former Ambassador to Canada David Wilkins remark that the U.S. should be buying even more Canadian energy. It is clear that our countries and our people need each other and benefit from the relationship we have.One major issue for Canada and the U.S. is unemployment, particularly youth unemployment. While the unemployment rate in Canada is lower than in the U.S., it is still too high, and recovery in the job market remains slow due to the recession.

In 2006, an electoral watershed empowered a (minority) Conservative government after 13 years of Liberal government and resulted in a long-term economic plan - Advantage Canada - that made remarkable economic progress in short order. The federal general corporate income tax rate has been reduced from more than 22 percent in 2006, to 16.5 percent this year, on its way to 15 percent in 2012.In 2007, I challenged the provinces to lower their corporate tax rates to 10 percent, and we have seen substantial progress at the provincial level. Indeed, when Ontario's corporate income tax cut is fully implemented in 2013 most business income in Canada will be taxed at a combined federal-provincial rate of 25 percent.In April 2008, signs of economic uncertainty and global financial turmoil had undeniably emerged; however, we anticipated the great recession as early as 2006. At the time, I had discussions with the prime minister regarding concerns about the U.S. and European economies, deficits and the accumulation of public debt. Our proactive response in 2006 was to pay down public debt, run balanced budgets and reduce taxes to encourage entrepreneurial activity.

In 2009, our Economic Action Plan earned the support of the House of Commons, resulting in quick action to produce funds for infrastructure and economic stimulus. It was crucial to deliver the money promptly, and I'm proud of the fact that it succeeded and that our unemployment rate never went into double digits, as was feared in December 2008.The challenges for Western industrialized economies have not changed, and global recovery remains fragile. Our response to the crisis focused on delivering competent economic performance and protecting Canadian jobs, which served a larger purpose of making Canada stronger and more competitive overall.

We had some advantages leading into the recession, including a strong financial sector. Globally, financial institutions and insurance companies suffered losses during the crisis of approximately $1.8 trillion; however, Canada's banks were solid and steadfast - based as they are on sound risk management and supported by a very effective regulatory and supervisory framework. We stay on top of our financial institutions through Canada's superintendent of financial institutions, who reports to Parliament through me.

We also have a prudent mortgage market in Canada that differs substantially from other markets, for example, in allowing recourse mortgages and disallowing mortgage interest deductibility. In 1979, the latter was a politically charged issue advanced by my party - the Progressive Conservative Party at the time - as a good idea to stimulate the mortgage market. My intention is not to use tax policy for such purpose.

Reflecting our prudent lending standards, Canadian lenders have demonstrated responsibility and restraint throughout the global financial crisis, and most residential loans in Canada stay with the mortgage originators. It is not a perfect system, and we carefully monitor the housing market. In fact, three times since 2008, I've intervened to tighten up the rules in our mortgage insurance market and manage our high loan-to-value ratio residential mortgage market by reducing allowable amortization periods and increasing down payments. There has been some moderation in the market since the most recent intervention, which happened in March, 2011.

On the fiscal side, our Economic Action Plan was bolstered by a federal debt-to-GDP ratio that fell to 29 percent in 2008-2009 - its lowest point in nearly 30 years. The stimulus plan brought our deficit to 3.6 percent of GDP in 2009-10, and it brought federal debt as a proportion of the Canadian GDP to 34 percent in the same year, which compares favorably to larger debt loads in the U.S. and the UK.

Looking forward, our federal debt-to-GDP ratio is expected to resume its downward track starting in 2012-2013.According to the IMF, Canada will be one of only two nations to return to budgetary balance by 2016, and by then, Canada's federal debt in relation to GDP will be less than 30 percent - that is, pre-recession levels. Thus, by paying down debt when the sun was shining in 2006, we were better able to respond - as all G20 nations agreed to respond - when economic gloom arrived. Canada and Germany are the only major industrialized countries to have fully recouped both output and employment losses experienced during the recession.

So let's look forward. How is Canada positioned? The business tax advantage we planned in 2007 is coming to fruition. We eliminated general capital taxes (taxes charged on a corporation's taxable capital) and with incentives encouraged the provincial governments to follow suit. These tax reductions have resulted in an overall tax rate on new business investment in Canada that is substantially lower than that in any other G7 country. We addressed specific concerns of U.S. investors and successfully encouraged foreign venture capital by narrowing the definition of taxable Canadian property - thereby eliminating the need for tax reporting under section 116 of the Income Tax Act for many investments. Most importantly, our response to the recession has been affordable, sustainable, broad-based, fiscally durable and structurally sound. As a result, Canada's foreign direct investment continues to rise.

We seek more global trade and are ahead of schedule in negotiations that look promising for a free trade agreement with the EU. Next year, Canada will be the first G20 country to be a tariff-free zone for industrial manufacturers. In the past five years, Canada has concluded free trade agreements with eight countries and is engaged in current negotiations with another 50 countries. Due to our stable financial and fiscal systems and active commitment to free trade, Moody's recently concluded Canada has made the jump from recovery to a self-sustaining expansion. For three years in a row, Canada's banking system has been ranked the soundest in the world by the World Economic Forum, and Bloomberg has placed five of the Canadian financial institutions on the list of the world's strongest banks. The Economist magazine's Economic Intelligence Unit recently ranked Canada as the best place to do business in the G7 over the course of the next five years.

Of course, Canada is not an island, and we must face global challenges, for example, with respect to sovereign debt problems in the EU.We expressed our concerns repeatedly with our colleagues in Europe, particularly because of the danger of contagion. Delayed response only causes more strife and makes resolution more expensive; thus, I continue to encourage my European colleagues to act as quickly as they can to resolve that situation.

We will stay on track with measures to control spending and balance the Canadian federal budget a year earlier than planned - by 2014-2015. This will allow us to fulfill an election campaign promise to allow families with children to split up to $50,000 in income to reduce their personal income taxes. As we brought in pension income splitting in the fall of 2006, we will implement income splitting for families with children upon balancing the budget. Always aimed at fiscal responsibility, our economic focus is on creating an environment that increases long-term jobs and strengthens economic growth - all while steadily eliminating the deficit.

Our next step is to call on the private sector. Government intervened in 2008-2010 with substantial deficits and economic stimulus, but now we encourage the private sector to step up. Encouraging signs include a 31 percent rise in new machinery and equipment investment by Canadian companies in the second quarter of this year, which we are incentivizing via accelerated depreciation. Further, in making these investments now, Canadian companies can leverage the relative strength of the Canadian dollar vis-à-vis the U.S. dollar in which this equipment is largely priced.

Fiscal consolidation was a priority at the G20 summit in Toronto last year, highlighting a recognized need for balanced books. Canada and the U.S. were among many leading countries that committed to cut fiscal deficits in half by 2013 and either stabilize or set debt-to-GDP ratios on a downward track by 2016. Canada will meet these targets At less than 2.5 percent of GDP this year, Canada's federal deficit in 2010-11 is projected to be reduced by more than a third compared with its level during the 2009-2010 stimulus spending period.

We remain concerned about the cost of government and will move forward with more spending reductions. Voters sometimes ask why we, in their view, obsess about moving toward balanced budgets, and I remind them about Canada's runaway inflation in the 1970s and 1980s. At that time, our prime rate of almost 23 percent in September, 1981 made it impossible for middle class homeowners to renew their mortgages. We must avoid this evil. Solid fiscal performance leads to balanced budgets and lower debt/interest charges, and it places government in a position to lower taxes and, thus, foster entrepreneurship in Canada.

Having served as Canada's finance minister for more than five years - working with three secretaries of the treasury, three chancellors of the exchequer and many ministers of finance of other G20 countries - it is clear to me that fiscal challenges cannot be ignored or wished away. Troubles in Europe serve to remind us that there is no shortage of economic pitfalls - that we will never be prepared for the next financial crisis if we're still grappling with the consequences of the last one.

Fiscal responsibility has a lot to offer. Having a clear strategy ensures market confidence, and we have a solid plan to eliminate deficits, reduce debt, hedge against the next global economic shock and deliver promised results on time. It's a tall order, but it is doable.As the world's largest economy, the U.S. plays a vital role in Canada's economy.Throughout our histories, we have sustained a mutually beneficial conversation, answered each other's calls for assistance in times of trouble and never allowed passing disagreements to become lifelong grudges - a relationship that friends around the globe can only dream of. 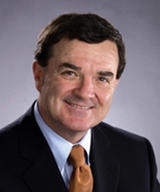 Editor: Tell us about your current activities. Taylor: I was a Canadian diplomat abroad for roughly twenty-five years and served in a number of posts around the world including Guatemala, Detroit, Pakistan, London, Ottawa, Tehran and New York. In that role, I was involved primarily with the...

Competition Law In Canada Since The 2009 Amendments

Editor: Let’s put the issue of “convergence” at the beginning of this interview. In your view, are our two countries on a path to harmonization in Competition Law? Or are there simply some points of administrative similarity? Collins: I do think that Canada and the U.S. are...

Editor: Welcome, Tim. Please tell us about REGEN Energy. Angus: REGEN Energy was established in 2005. We have been selling a developed and patented market offering since 2008, and North America is a strong market for us. A leading-edge technology company, REGEN offers solutions that enable...

SEE ALL ARTICLES ON Canada