Over the last few years, companies have faced increasing pressure from shareholders, governments, regulators, employees, customers, and other stakeholders to improve their records on boardroom diversity. In light of these pressures, we wanted to take a closer look at the current state of boardroom diversity and inclusion, looking at elements like gender, age, and expertise across companies located in Europe, the United States, Canada, and Australia. Additionally, we took a deep-dive into the potential overboarding of directors, and which sectors lead in appointing diverse directors.

France Remains the Country with the Highest Percentage of Female Representation

Our findings suggest that France continues to have the highest female representation on board. Women held 41.8 percent of board seats in our sample in 2019 and 43.1 percent in 2021.

In the United Kingdom, we found significant growth in female representation on boards. From 2019 to 2020, the percentage of board seats held by women increased from 26.4 percent to 30 percent. As of June 2021, the percentage is now 32 percent.

In Canada, our data suggests that female inclusion in the boardroom is steadily rising. From 2019 to 2020, the average percent of board seats held by women moved from 24.5 percent to 27.4 percent, an increase of 2.9 percentage points.

The country with the lowest female representation in the boardroom is Austria, with women holding only 21 percent of the country’s board seats in our sample, lagging the 30 percent national quota prescribed for their supervisory boards.

Across all countries surveyed and examined in our sample, women currently account for 36 percent of new board appointments, up from 34 percent in 2020. 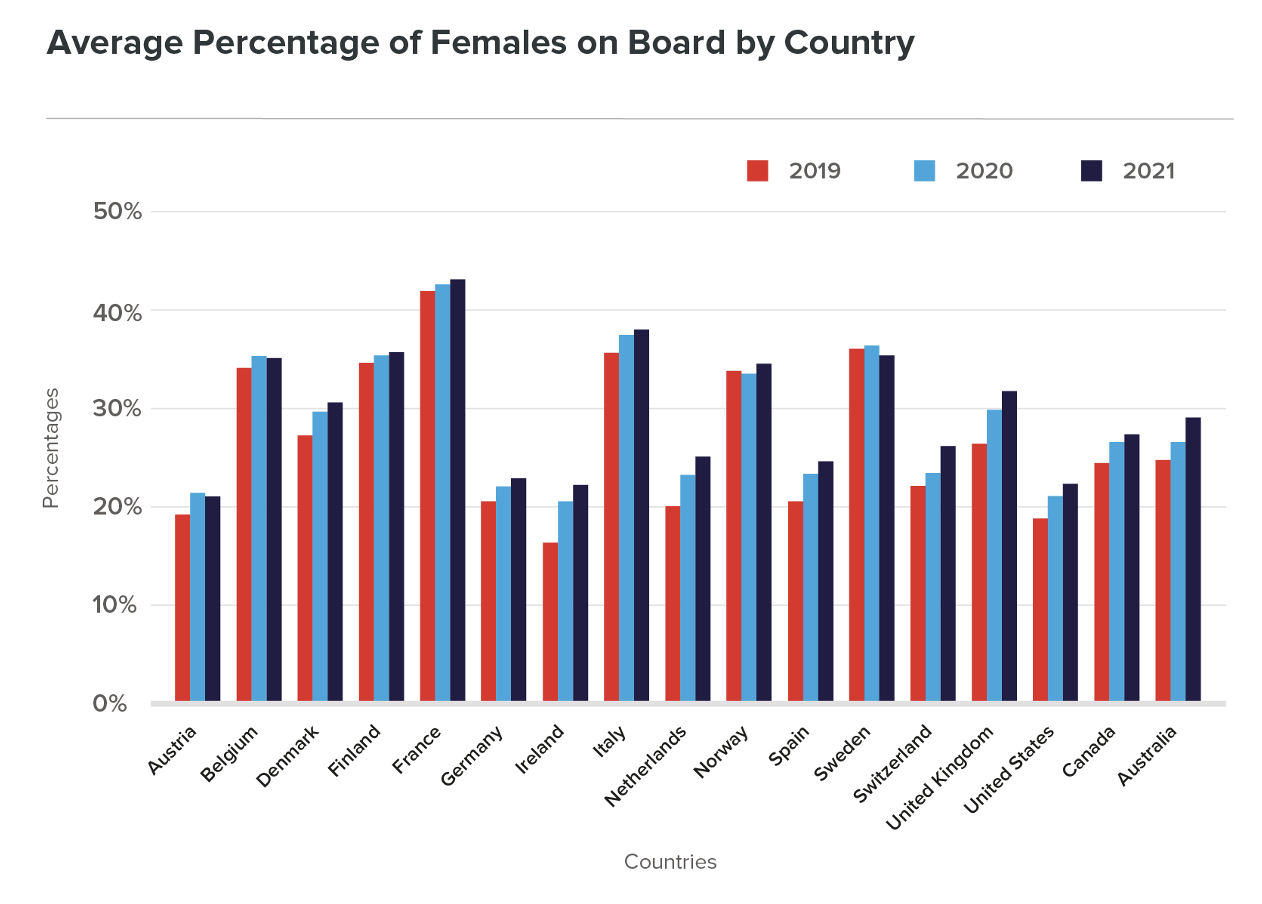 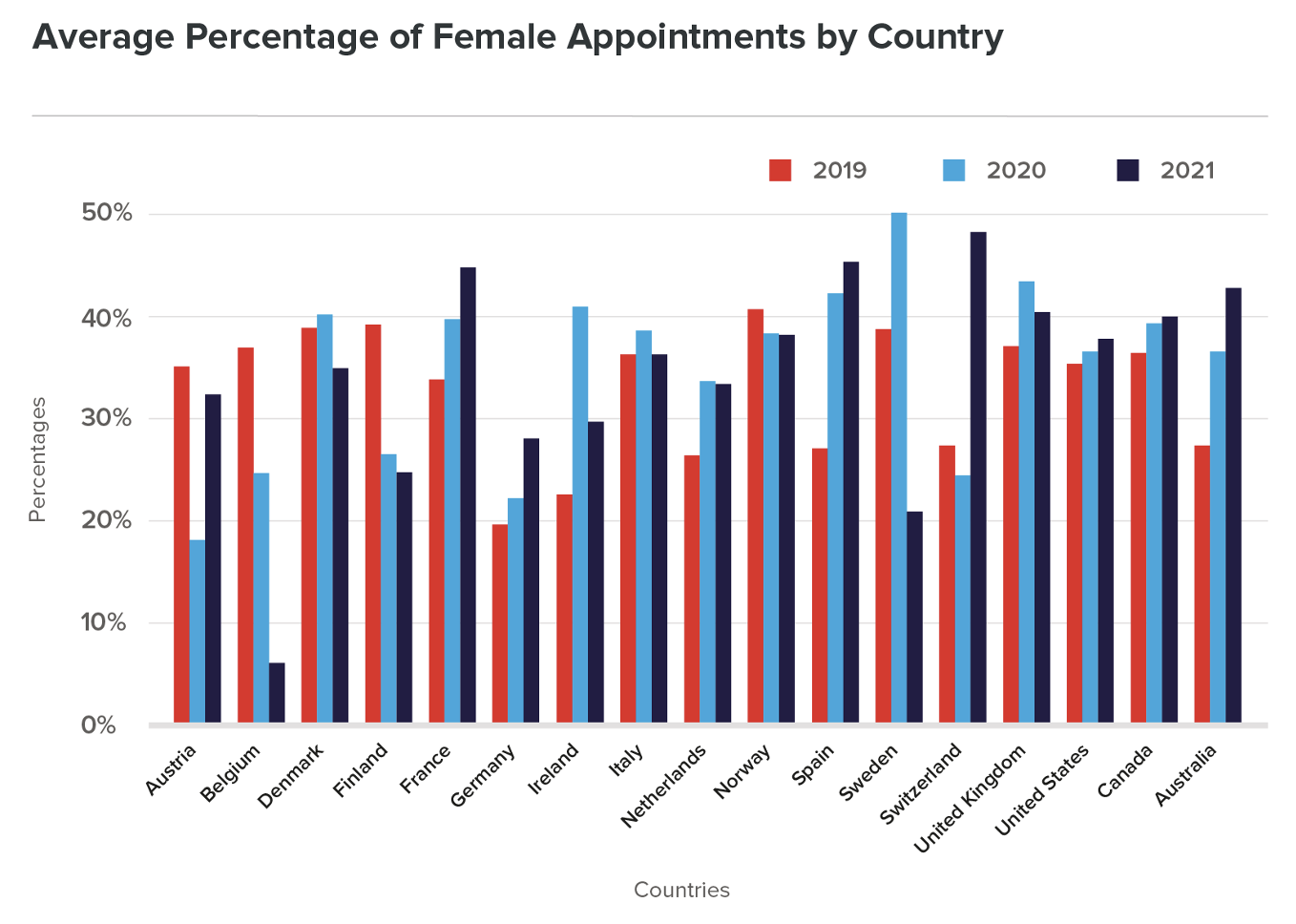 All-Male Boards Persist For Some Companies

The Average Age of Board Members is Rising 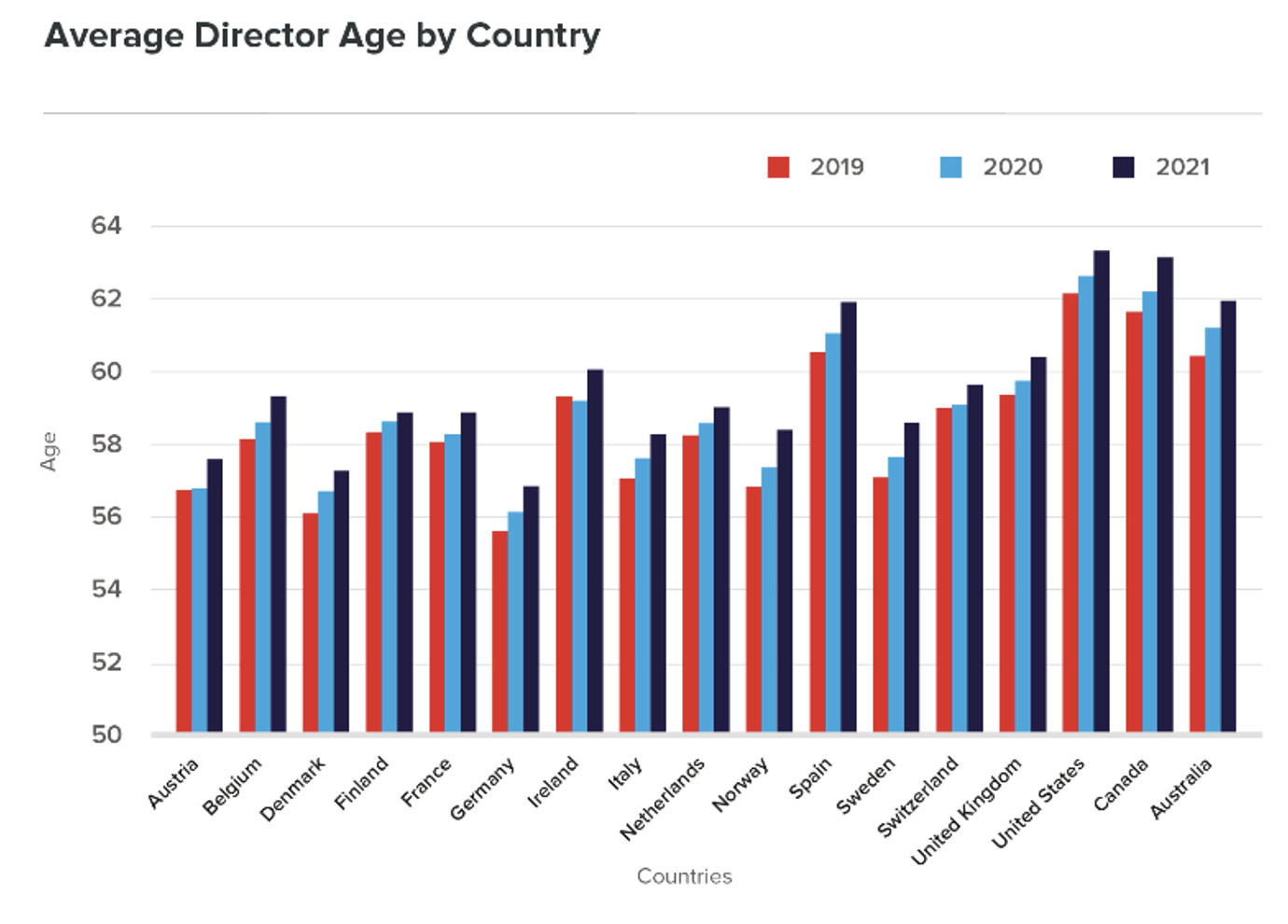 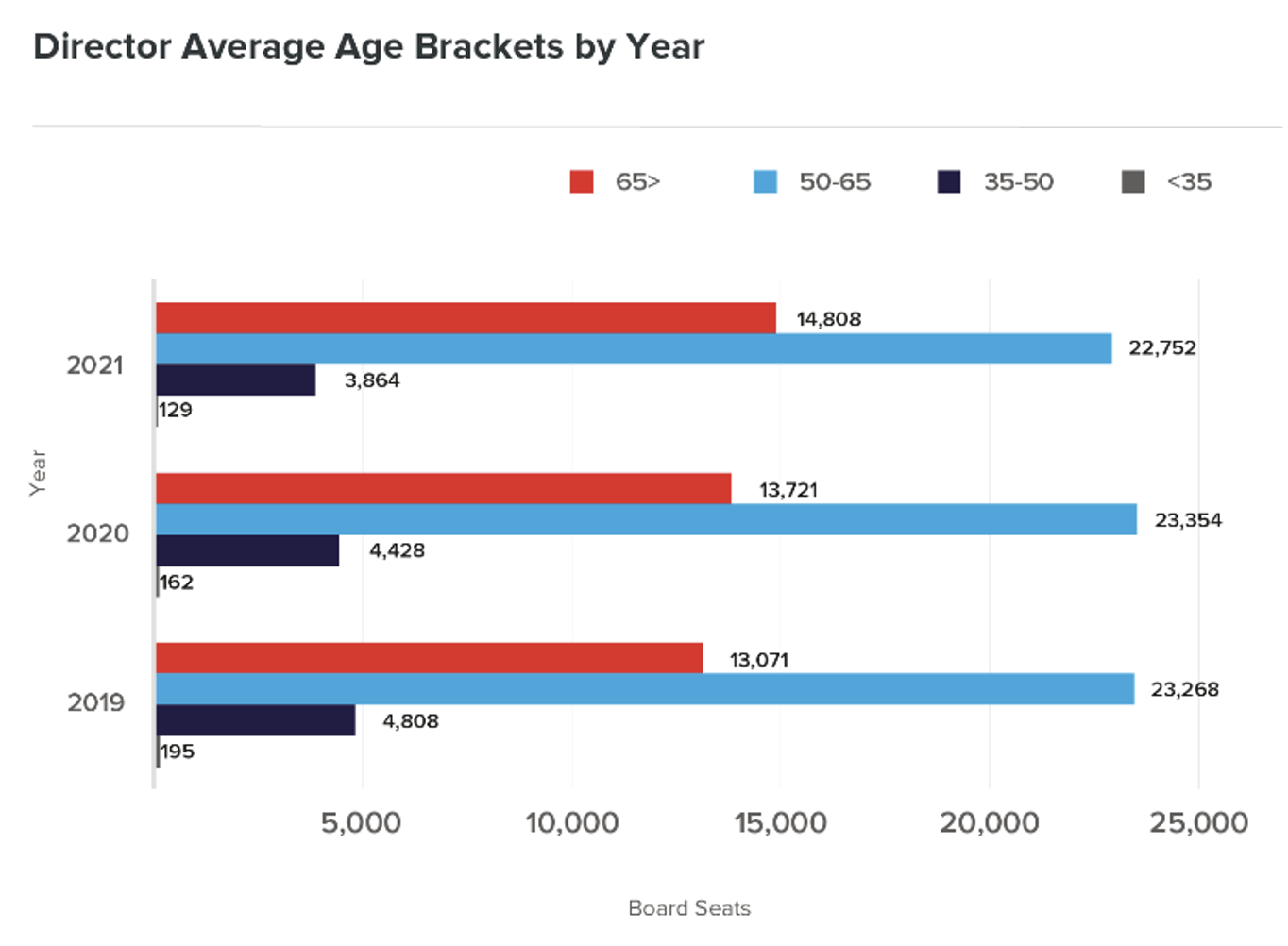 The financial sector and information technology sector has less than 2 percent of companies with directors in all age brackets with 1.49 percent and 1.19 percent respectively. 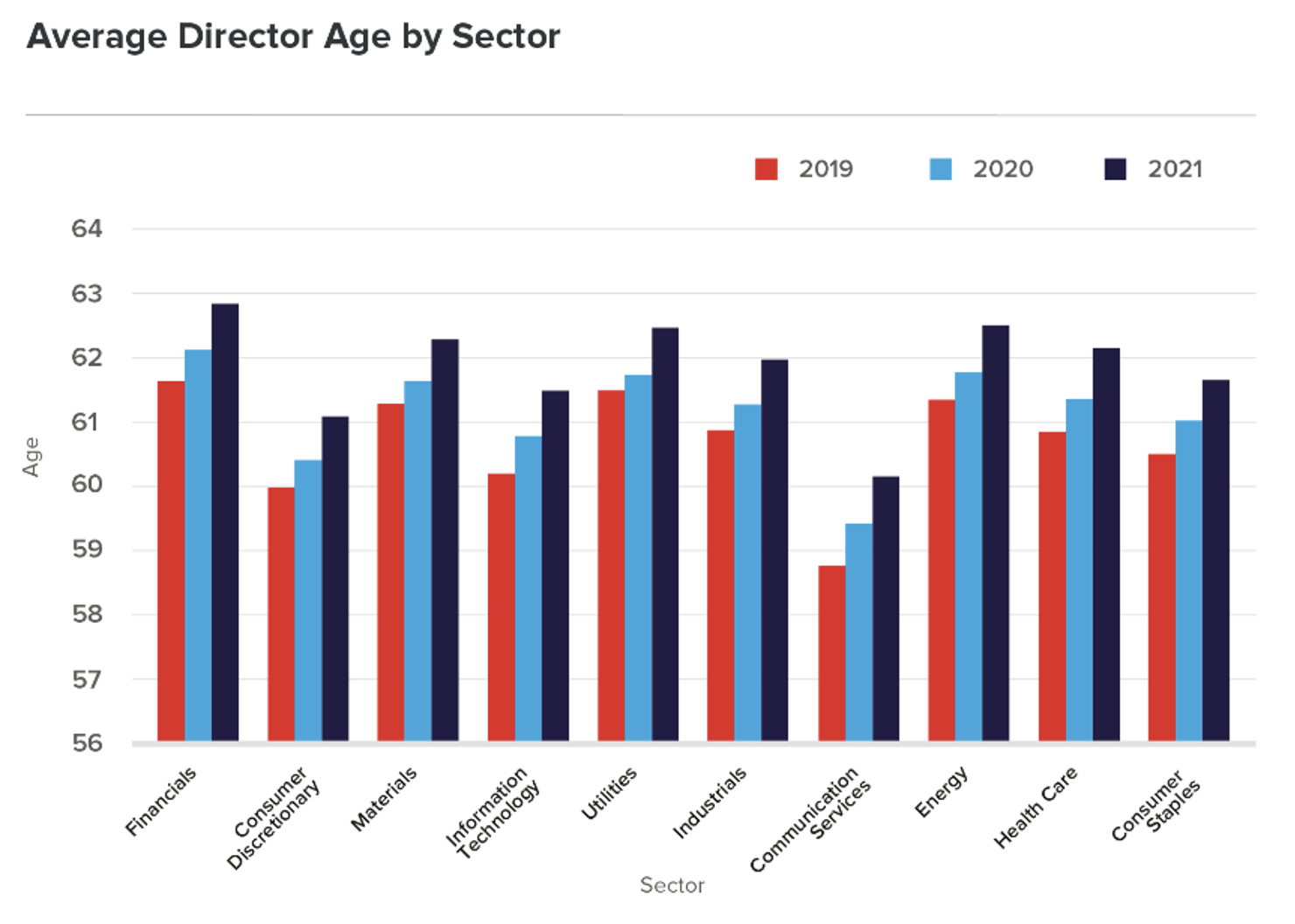 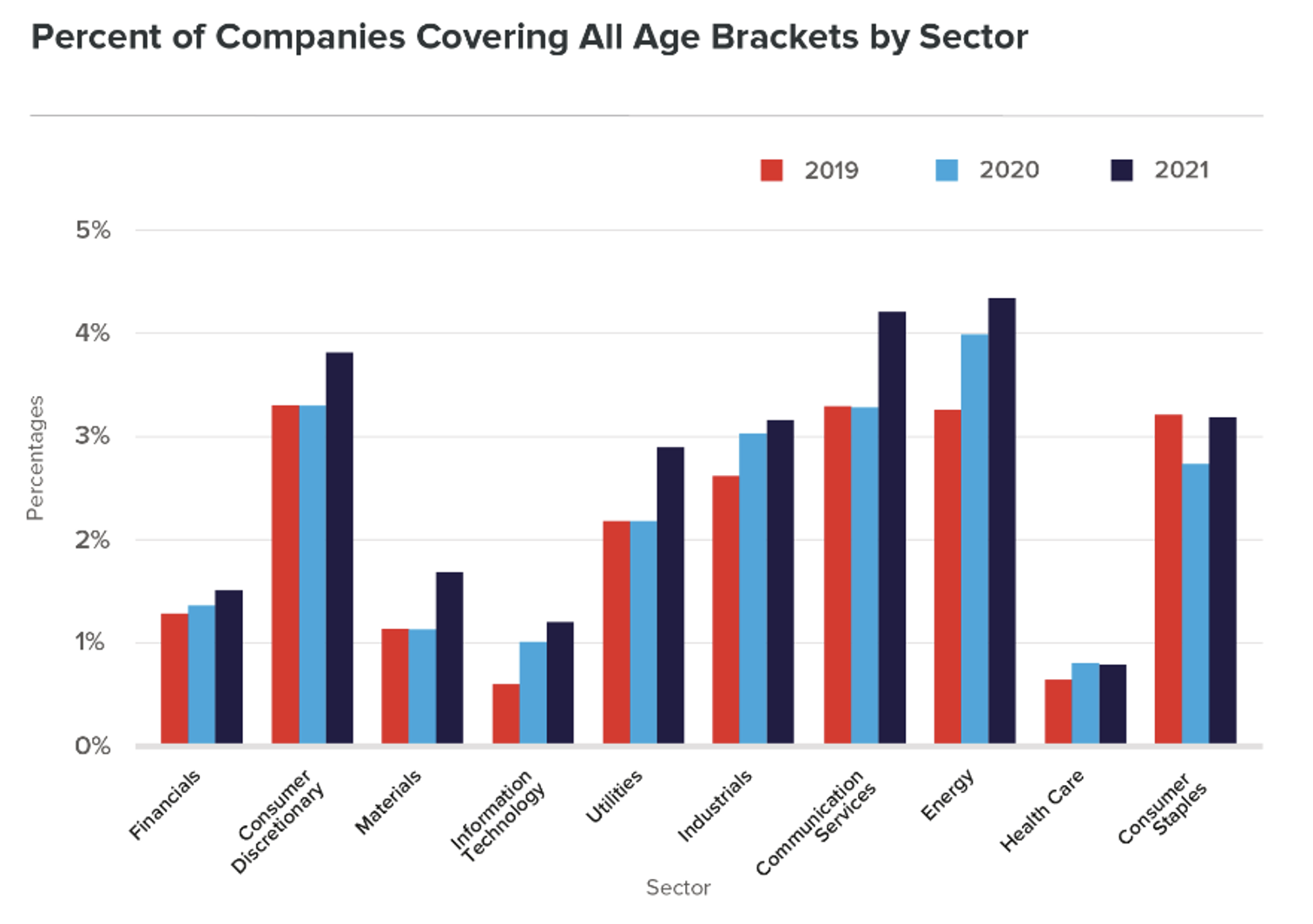 Overboarding: How Many Boards Seats is Too Much for a Director?

The word “overboarded” is often used to refer to a director who sits on an excessive number of boards and is therefore unable to fulfil their responsibilities to the best of their abilities. We analyzed companies in various jurisdictions based on their own countries’ Corporate Governance Codes and our standard or policy[2]. In a situation where the Code is silent on overboarding, companies were rated on our in-house policy alone. 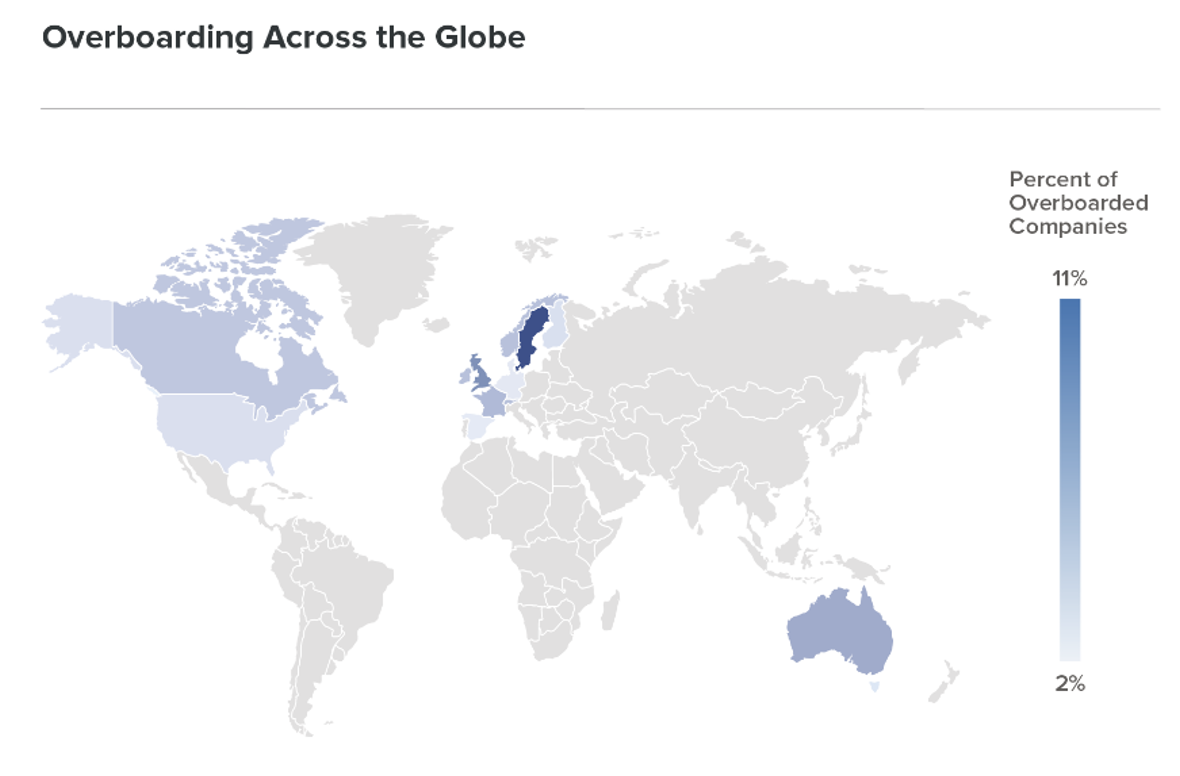 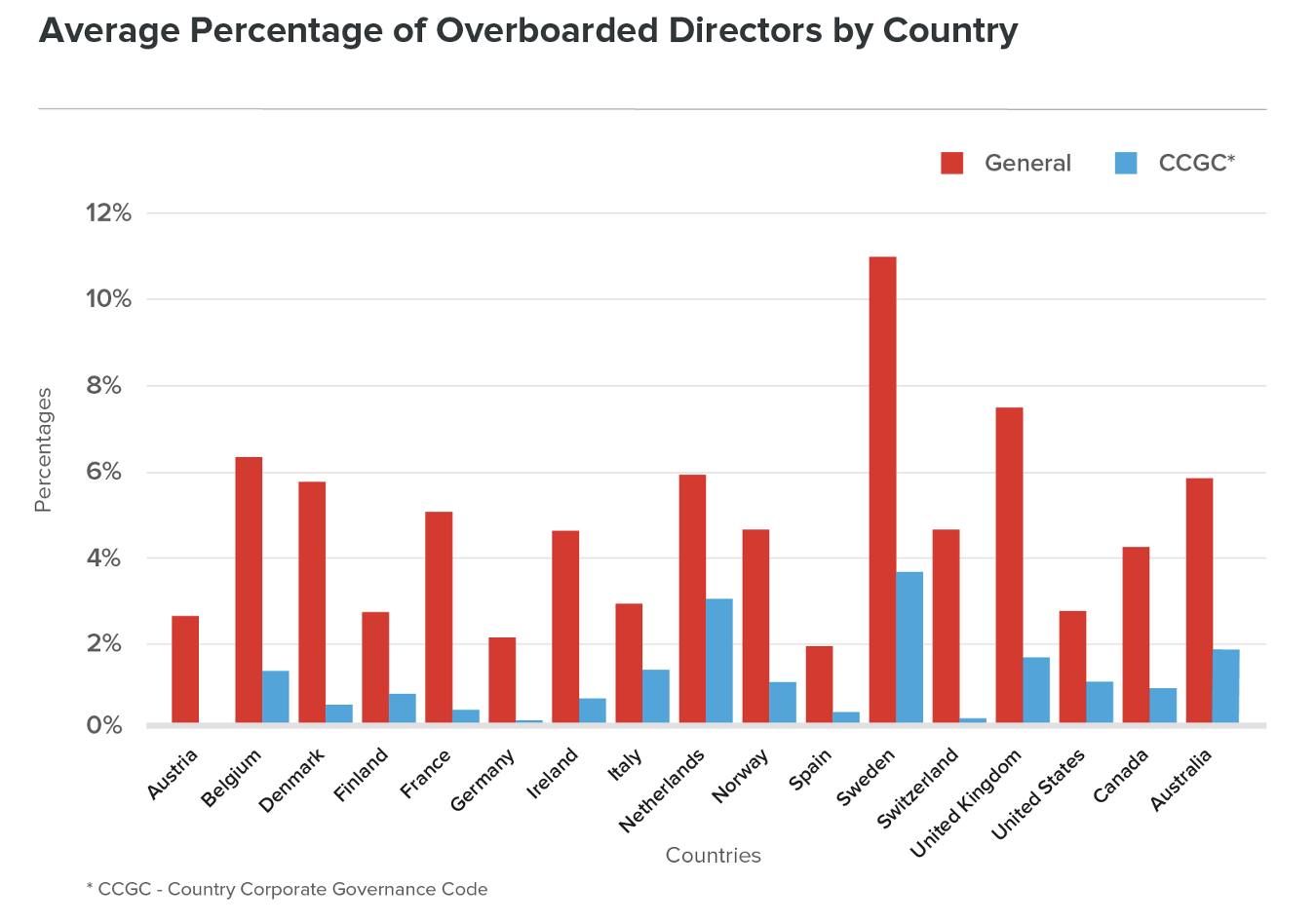 Which Skill Sets Are Represented on the Board? 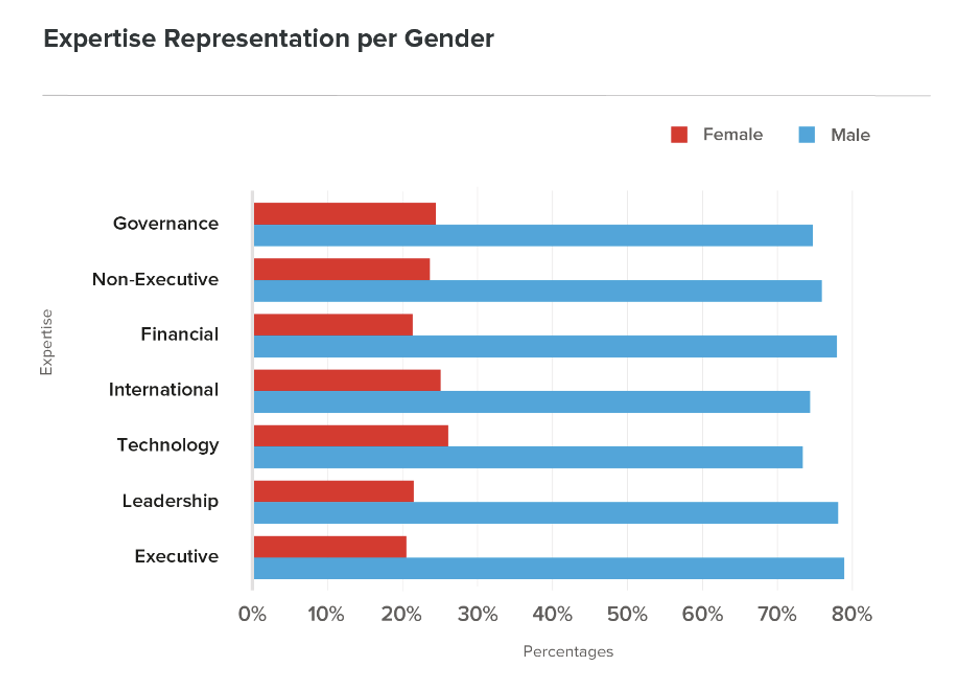 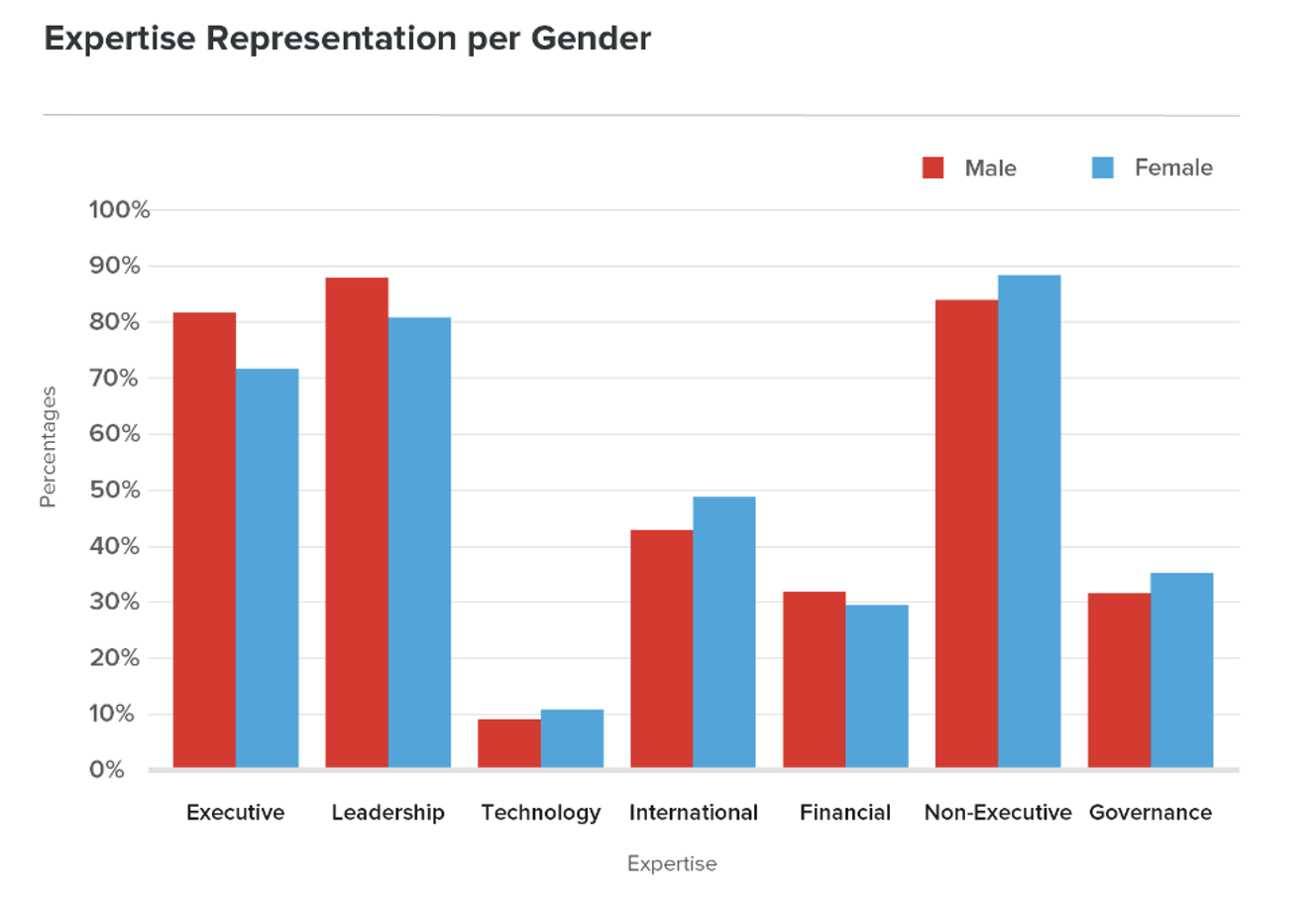 Understanding that director appointments with nontraditional (non-executive) backgrounds tend to be women can help your organization make more strategic hires. If you need to improve gender diversity on your board, but also need the perspectives of directors with different, more non-traditional skillsets, you may be able to solve for multiple elements of diversity with a single hire, thus diversifying the perspective of your board even more.

Many companies now agree that diversity of perspective leads to more innovation, better risk management​, and stronger connections with customers, employees, and business partners. While tremendous progress has been made, there is significant work yet to be done.

Continuous public debate is leading to countries worldwide addressing the issue on legislation level, as well as companies developing internal policies and incentives for corporate leaders to drive their businesses in more sustainable and inclusive directions.

The data and analysis explained above indicate that companies around the world are moving towards goals of gender equality on boards. However, many companies still trail national and supranational goals. In 2017, the European Commission (EC) announced that it would push for a mandatory gender diversity provision for company boards. The EC stated that companies with more than 60 percent of males on their boards should prioritize the recruitment of female candidates when filling open board positions. The EU has been pushing for a goal of at least 40 percent of women on company boards.

In 2020, the level of representation of women in European boards was 30 percent, up from 28 percent in 2019, falling behind the EC’s proposals by 10 percent. Even though female representation has increased to 31 percent in 2021, it still trails the quota set by the European Commission. Despite improvements, the data suggests that there is still much work to do until European boards reach their goal of 40 percent.

Quotas have been very influential in increasing female representation at board level in the United Kingdom, for example. From 2019 to 2020, we see quite a significant upsurge in female boardroom appointments, perhaps due to the soft deadline set by Lord Davies. In his final report, he included a new target for FTSE 350 companies of 33 percent female positions in board rooms by 2020. The new target was a strengthened quota after issuers in the FTSE 100 index reached the set target of 25 percent female representation in board rooms in 2015, a target which was set in 2011. Time will tell if similar regulations in the United States have similar effects.

About the Diligent Institute

Diligent Institute seeks to help corporate leaders be more effective by providing cutting-edge insights on corporate governance, by amplifying the voices of diverse corporate leaders, and by sharing broadly all that we are learning about modern governance practices.

Founded in 2018, Diligent Institute serves as the global corporate governance research arm and think tank of Diligent Corporation, the largest SaaS software company in the Governance, Risk and Compliance (GRC) space. We produce original research both on our own and in collaboration with partners, including institutions of higher education and thought leaders in the corporate governance space. We produce over a dozen reports each year, ranging from our monthly Director Confidence Index, which measures how corporate directors are feeling about the economy, to in-depth reviews of issues such as ESG (environment, social, governance) practices, to our AI-powered Corporate Sentiment Tracker that analyzes data from thousands of public sources to discern what’s on the minds of corporate leaders. Diligent Institute is funded solely by Diligent Corporation, the largest governance, risk and compliance (GRC) SaaS provider. 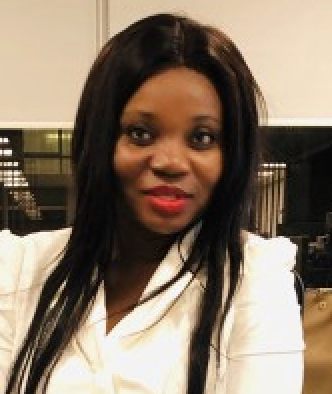 Megan Belcher, senior vice president and general counsel of Scoular, a $4 billion supply chain solutions company for end users and suppliers of grain, feed ingredients and food ingredients, based in Omaha, talks about building inclusive and collaborative in-house teams that get things done.

Sasha Carbone discusses the organization’s efforts to improve diversity and inclusion – from their roster to their staff and beyond.

With a focus on increasing its diversity, equity and inclusion (DEI) impact, Barnes & Thornburg felt it was important to begin collecting data on DEI efforts and client needs more efficiently. The firm created the position of DEI analyst and hired Marci Hunter, an experienced quality assurance professional and DEI supporter, for the role. Here, she expresses the importance of DEI data analysis.